How to view your iPad or iPhone on your PC

There are few pieces of software available for displaying your iPad or iPhone display directly on your PC or Apple Mac.  The method is called mirroring and can be done with software such as Airserver or Reflector .

Mirroring works by installing software on your PC or Mac, the software listens over your network for an iPad or iPhone.  When AirPlay is turned and computer is selected  on your Apple device (see below) this establishes a link via your wireless network.  The screen is then mirrored to your computer. 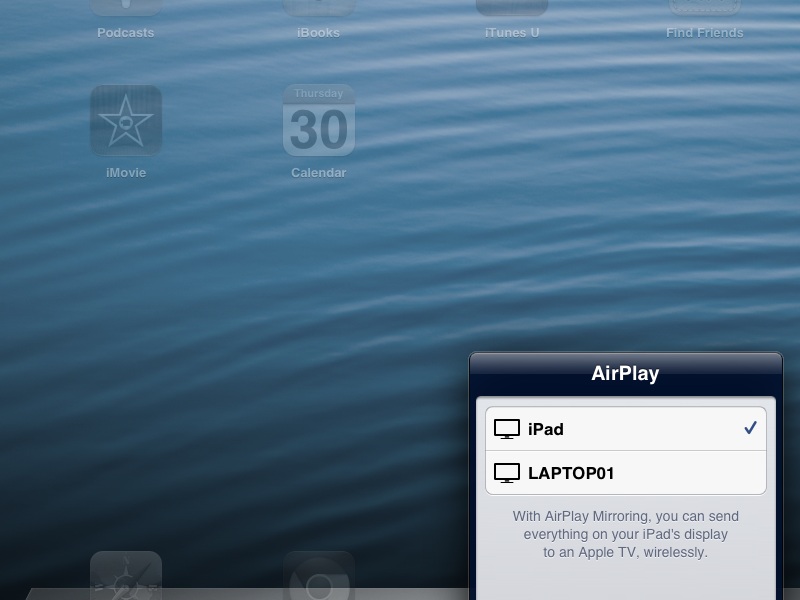 To switch on AirPlay make sure your AirPlay server is running (either Reflector or AirServer) then double click home button on apple device, scroll to the left and you will see the AirPlay icon, click it and select the name of your AirPlay server.

This is the first piece of software I found for mirroring my iPad screen. It is free to use for 10mins but requires an upgrade starting at $12.99 to remove this limitation. Reflector has all the features you would expect and supports screen recording which is a fantastic feature.  Unfortunately I found it very stuttery and laggy on my mini laptop so then tried it on a powerful 6x core AMD desktop PC, which the results were better but still at times stuttering on display and recording For me this was really disappointing as the software done everything that I wanted and the trial allowed me to test it before purchasing it.

Maybe with a different wireless router the lag would have disappeared but if this is the case it probably means that many people will have the same problems I encountered.

Available for both PC and Mac Airserver has a free trial and can be upgraded to full version from $14.99.  I found this to be the quickest out of the two and works well on a low power laptop using a standard wireless ‘n’ router.  Airserver unfortunately doesn’t have a record feature which I think is very disappointing but by far in my tests I found it had little to no lag or stuttering.

To then record mirrored view of your Apple device you will need to use another piece of software alongside AirServer.  On the PC you can use a piece of software like FRAP.  FRAPS full version costs £24.99, its quite expensive in my opinion but you can always use the free version which displays a FRAPS watermark over your recorded video.

FRAPS of course has many more uses for recording your computer screen, which is great for demonstration or tutorial or video games, so in that case is well worth the investment.  FRAPS is fully featured and for a long time has been used by the gaming community to record videos of fast moving games.

FRAPS is fully featured and has lots and lots of options for video record size and colour correction, there are a few more pieces of software that offer similar features but my first choice is FRAPS due to its long standing reputation in PC Gaming circles.

See Our Facebook page for latest stock of reconditioned Laptops & PC's, Special Offers and much more!

Welcome to the launch of the new Computer World Online website.

Finally we have the news that we’ve been waiting for…. We’re going to get out start button back!  Since Windows 8’s release our customers and ourselves have been frustrated at the fact Microsoft had changed some of the features and views we’ve been used to in operating systems for many years

Codenamed ‘Blue’ Microsoft plan to release an update in May for Windows 8, rumours are all over the net about a Windows 8 Start Button!

What Our Customers Say

It’s incredible how much you miss your main means of contacting the outside world and I owe you a debt of gratitude for sorting me out returning my sanity. Many thanks!